Protecting you from rogue and misleading calls during federal elections

Democracy depends on well-informed voters making sound decisions about the individuals and political parties they choose to represent them in Parliament.

Those seeking office have access to a vast array of communications methods to connect with potential supporters to explain their personal motivation and platforms during election campaigns. However, the desire to connect with voters must be tempered with respect for Canadians’ privacy and the protection of their right to refuse to be contacted by individuals or political groups if they so choose.

During an election campaign, political candidates and parties and their supporters are obliged to follow certain rules related to contacting Canadians, some of which are enforced by the Canadian Radio-television and Telecommunications Commission (CRTC).

Concerns about fraudulent calls to voters during federal election campaigns prompted Parliament to pass the Fair Elections Act in 2014.

Elections Canada received more than 40,000 messages and complaints about so-called robocalls during the 2011 federal election. People reported receiving both automated and live calls from individuals claiming to represent Elections Canada to advise them that their poll location had changed. Even those who did not receive an inappropriate call expressed frustration with calls they considered to be annoying or harassing.

The Chief Electoral Officer reported in 2012 that the number of complaints alleging improper or fraudulent calls was nearly 800. In 2013, a Federal Court judge determined that fraud was a factor in the robocalls.

The Fair Elections Act amends the Canada Elections Act to give the CRTC the responsibility to establish, maintain and enforce a voter contact registry, which will “help protect Canadians from rogue and misleading telephone calls during elections, and to help ensure that those who contact voters during an election do so transparently.”

This means that individuals and organizations making telephone calls to Canadians during a federal election may need to register with the CRTC if they contact voters for any purpose related to an election.

As a general principle, political entities such as political parties and candidates are permitted to call voters.

The Fair Elections Act also made changes to the Telecommunications Act, which is administered by the CRTC.  The Act governs unsolicited telecommunications, including rules related to telemarketing and ADADS.  This refers to equipment capable of storing or producing phone numbers and sending a pre-recorded or synthesized voice message – a robocall.

Amendments to the Telecommunications Act now provide the CRTC with the additional authority to administer and enforce the rules relating to the new Voter Contact Registry. 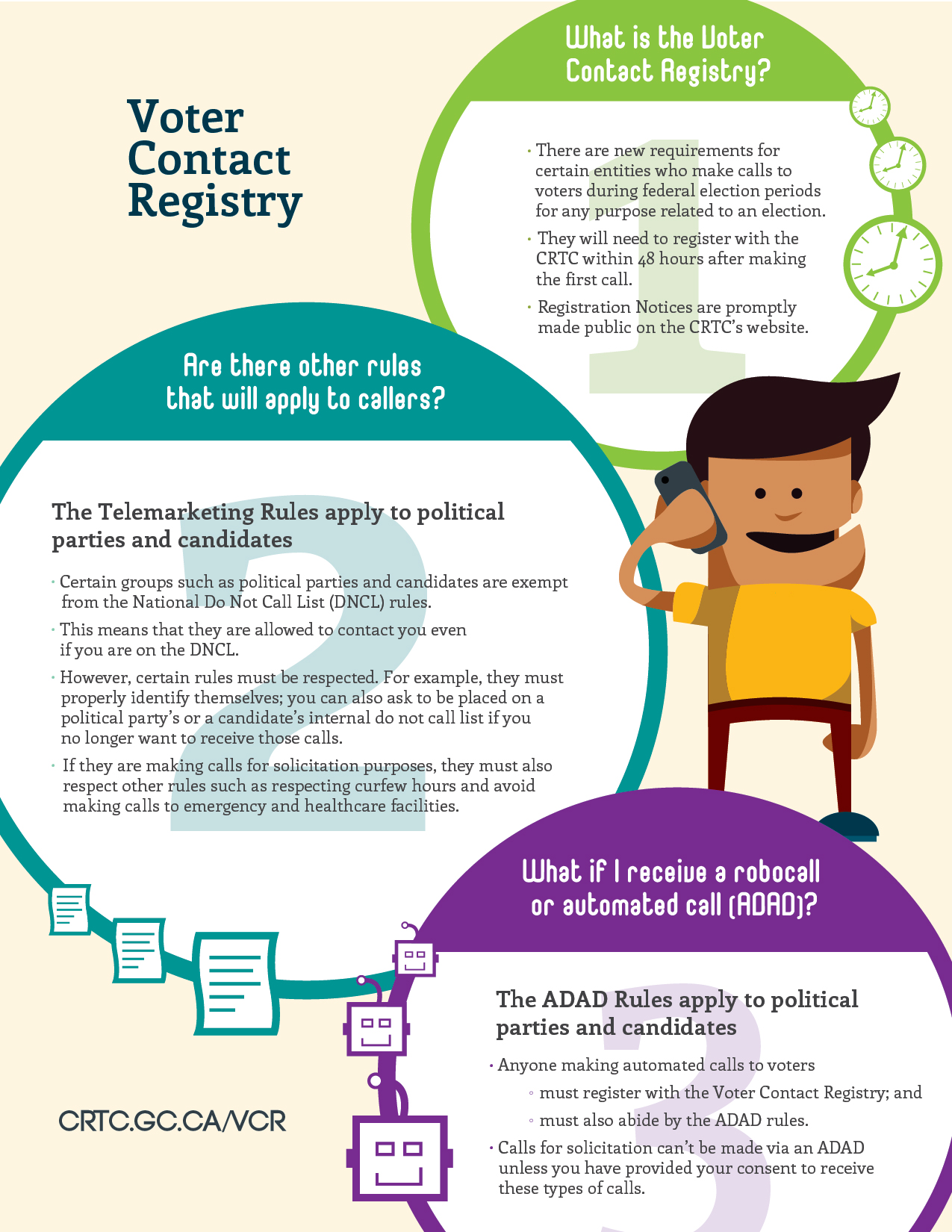 Who needs to register?

Who does NOT need to register?

You are one of the following:

AND you are using your own internal services to make live calls to voters.

The term ‘calling service provider’ refers to an individual or a group that carries on a business whose activities include making calls for, or on behalf of, another person or group.

Individuals and groups required to register with the CRTC must do so within 48 hours of making the first call. In accordance with the new provisions of the Canada Elections Act, the CRTC is required to publish registration notices promptly, but no later than 30 days after polling day. Notices will now be published regularly.

What other CRTC rules must political organizations follow when calling voters?

As part of its overall responsibility for unsolicited telecommunications, the CRTC administers the Telemarketing Rules and the Automatic Dialing-Announcing Device (ADAD) Rules.  Some of these rules apply to political entities such as political parties, candidates and organizations that represent the official campaigns of such parties or candidates.  When calls involve a request for campaign donations, for example, the Telemarketing Rules apply.  In addition, if making calls through an ADAD, these entities also have to respect the ADAD Rules.

In all cases where unsolicited calls are made, these entities must identify themselves and the purpose of their call and must maintain an “internal” do not call list.

Certain political entities such as – political parties, riding associations and candidates – are not subject to the National Do Not Call (DNCL) Rules. These rules prevent most telemarketers from making telemarketing calls to Canadians who have registered their telephone number on the National DNCL List.  The exemption means that these political organizations can call individuals who are registered on the National DNCL, provided they maintain and respect their internal “do not call” list and identify themselves and the purpose of their call.  This ensures that voters who choose to take their calls have access to information they may desire to make their voting decisions. Calls for the sole purpose of conducting a survey, such as those carried out by market research and polling firms, are also exempt from the National DNCL Rules.

Rules that apply to ADAD calls

Telephone calls are just one way political entities can reach out to potential voters.  A wide array of technological tools is available to individual candidates and political organizations – some of which are subject to specific rules that are also enforced by the CRTC.

Canada’s Anti Spam Legislation (CASL), for instance, may apply to certain communications during an election.  The legislation has rules regarding commercial electronic messages (CEMs).

A CEM is a message that encourages participation in a commercial activity, including, but not limited to, offering, advertising or promoting a product, a service or a person.  Examples include messages sent via email, SMS text messages and instant messaging.

Political parties and candidates are largely excluded from CASL. Specifically, they do not need consent in order to send a CEM if the primary purpose of the message is to solicit a financial or non-monetary donation.

If you would like further information on CASL and how it may apply to political parties, please consult the CRTC’s website at crtc.gc.ca/antispam.

What to do if you get an unsolicited call during an election period?

If you suspect you have been called by someone who may not have properly registered with the Voter Contact Registry, you can file a complaint with the CRTC.

If you have received a call that you believe does not comply with the CRTC’s Telemarketing Rules or ADAD Rules, you can make a complaint with the CRTC through the National DNCL website at dncl.gc.ca.

The CRTC has the authority to investigate complaints regarding potential violations tothe Voter Contact Registry and other rules surrounding unsolicited telecommunications. The CRTC’s approach to compliance with the Rules on unsolicited communications includes a mix of promotion, investigation and enforcement activities meant to encourage adherence to the law, and it will do so with respect to the Voter Contact Registry.  Among the measures at its disposal, the CRTC can send warning letters, issue citations or impose monetary penalties of:

The total amount of the financial penalties can add up quickly, as each day of non-compliance may constitute a separate violation.

You can find further information about the Voter Contact Registry at: crtc.gc.ca/eng/phone/rce-vcr/

You can also learn more about the CRTC’s Unsolicited Telecommunications Rules and how these Rules apply to political entities.

Finally, for more information about Canada’s Anti Spam Legislation, you can find additional information at: crtc.gc.ca/antispam or fightspam.gc.ca