A World of Choice - A roadmap to maximize choice for TV viewers and to foster a healthy, dynamic TV market

This policy sets out a roadmap to give Canadians more choice when it comes to the selection and packaging of their TV services. It also seeks to ensure that Canadians have access to a diverse range of content through a healthy, dynamic TV market. The policy is a result of the process initiated by Let’s Talk TV: A Conversation with Canadians and follows the Commission’s policy decisions regarding local over-the-air TV, simultaneous substitution and content creation. The Commission’s policy decision concerning consumer information and recourse will be published in the coming weeks.

A world of choice...

As illustrated in the appendix to this policy and on the Commission’s website, a key aim of this policy is to provide Canadians with “a world of choice.” This includes the ability to create their own value proposition based on the TV services they want to receive and pay for.

Once in place, this regime will allow Canadians to pick and pay for the channels they want. Canadians will also have the opportunity to benefit from a $25 entry-level service offering. The roadmap includes a transition period that balances the objective of providing Canadians with pick-and-pay options as soon as possible with the practical reality that distributors will need time to fully implement the regime.

A roadmap to choice...

The changes being made reflect the trend towards increasingly competitive and customizable on-demand options, while taking into account the need to bridge old and new approaches to allow for maximum flexibility in how content is distributed and consumed. Distributors will be required to offer more Canadian than non-Canadian services. Moreover, by March 2016, all discretionary services will have to be offered by licensed broadcasting distribution undertakings (BDUs) either on a pick-and-pay basis or in small, reasonably priced packages, which may either be created by the subscriber (for example, pick-5 or pick-10) or pre-assembled (for example, theme packs). Further, by December 2016, all discretionary services will have to be offered on both a pick-and-pay and a small package basis by all licensed BDUs. This will give distributors time to make the changes that are needed to roll out these new options to their subscribers.

As a result of these changes, subscribers will ultimately choose how many and what Canadian or non-Canadian discretionary channels they wish to receive beyond the entry-level service offering, which prioritizes Canadian TV services. Discretionary TV services will need to innovate and improve their programming if they are to continue to appeal and remain relevant to Canadian viewers. Some channels may not survive in an environment marked by greater subscriber choice, while others will adapt and thrive.

The Commission expects that a number of Canadians will choose to consume content on traditional platforms in the same ways and quantities as they have for years. However, at the core of the policy changes adopted as a result of the Let’s Talk TV process is the idea that true innovation and high-quality programming must be fostered if Canadian broadcasters and creators are to successfully compete for Canadian and international audiences over the long term.

A vigorous wholesale market is also essential to fostering a retail market that favors greater subscriber choice. Accordingly, another key aim of this policy is to ensure that agreements between TV service providers and programmers support consumer choice so that Canadians are able to choose the discretionary channels they want. A healthy wholesale market will also serve to support the creation of a diverse range of programming made by Canadians, including that provided by independently owned Canadian channels. To help achieve these objectives, the Commission is creating a strengthened Wholesale Code to frame the wholesale relationship between all distributors and programmers. The Wholesale Code will be applied to all licensed undertakings by way of regulation.

The Commission has also published today a notice of consultation to seek comment on the wording of the Wholesale Code with a view to implementing it by no later than September 2015.

Opening the market to more players...

Also, the Commission is broadening the exemption order for terrestrial BDUs with fewer than 20,000 subscribers to allow these BDUs to enter and compete in markets with licensed BDUs. This will allow more distributors to compete in larger markets without first having to get a licence, providing Canadians with a greater choice of TV service providers.

A diversity of voices to choose from...

Current service-specific access privileges for independent discretionary programming services will be removed at their next licence renewal.To ensure that a diversity of voices is offered to Canadians, beginning 1 September 2018, vertically integrated BDUs will be required to offer one English- and French-language independent service for every English- and French-language service of their own that they offer (1:1 ratio). This date aligns with the time when the first independent services are set to be renewed.

Also, the current rules for direct-to-home distributors will be modified so that one French-language service is distributed for every ten English-language services. BDUs may also apply to be authorized to add an out-of-province designated educational service in each official language to the entry-level service offering in provinces and territories where there are no such services. This means that Canadians living in official language minority communities will have access to television channels in their official language, including quality programming aimed at children and youth.

Choice and flexibility - A healthy and dynamic retail market

Phase-out of access privileges and introduction of a ratio between related and independent discretionary programming services - Creating a fair playing field so that discretionary services can find new, innovative ways to serve Canadians

Other measures to foster greater choice, programming diversity and reflection 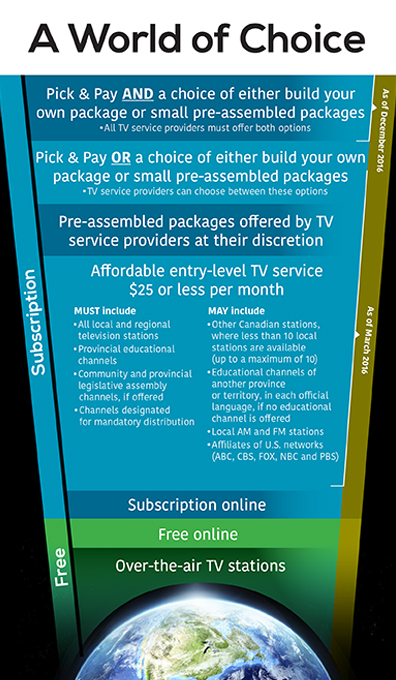 In this regard, see Broadcasting Notice of Invitation 2013-563.

On 7 November 2013, the Governor in Council published Order in Council P.C. 2013-1167 (the OIC). Noting that the Commission had announced a public consultation process on the future of Canadian television and pursuant to section 15 of the Broadcasting Act (the Act), the OIC requested that the Commission make a report as soon as feasible, but no later than April 30, 2014, on how the ability of Canadian consumers to subscribe to pay and specialty television services on a service-by-service basis can be maximized in a manner that most appropriately furthers the broadcasting policy for Canada set out in subsection 3(1) of the Act, while having regard to the objectives of the regulatory policy set out in subsection 5(2) of the Act.

Currently, these services are APTN, CPAC, AMI-tv, AMI-tv français, TV5/UNIS in all markets; RDI, TVA, The Weather Network and AMI-audio in English-language markets; CBC News Network, Météomédia, Canal M and Avis de Recherche in French-language markets; and the Legislative Assemblies of Nunavut and the Northwest Territories for direct-to-home satellite distributors in Nunavut and the Northwest Territories.

With the exception of UNIS, the mandatory distribution orders issued for these services only apply in markets where their target audience is in a minority situation.